"Which of these three, do you think,
was a neighbor
to the man who fell into the hands of the robbers?”
The lawyer said, “The one who showed him mercy.”
Jesus said to him,
“Go and do likewise.”

FEBRUARY 10, 2017
TRANSFIGURATION
AND
THE SACRAMENT OF BAPTISM

FEBRUARY 10, 2017
A SERVICE OF DEATH AND RESURRECTION
CELEBRATING THE LIFE AND FAITH OF
MARY JO SALTER HUGHES

FEBRUARY 5, 2017
THE SACRAMENT OF HOLY COMMUNION 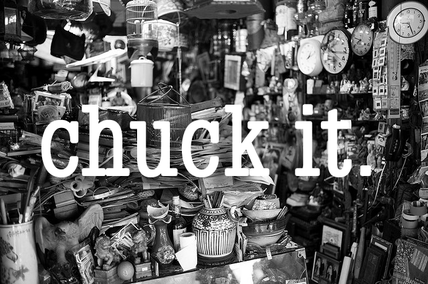 DECEMBER 24, 2016
THE FEAST OF THE NATIVITY
THE CHRIST CANDLE

AN EXCERPT FROM
​ABRAHAM LINCOLN'S 2ND INAUGURAL ADDRESS
[At the outset of the war,] Neither party expected for the war [to reach] the magnitude or the duration which it has already attained. Neither anticipated that the cause of the conflict might cease with or even before the conflict itself should cease. Each looked for an easier triumph, and a result less fundamental and astounding. Both read the same Bible and pray to the same God, and each invokes His aid against the other. It may seem strange that any men should dare to ask a just God's assistance in wringing their bread from the sweat of other men's faces, but let us judge not, that we be not judged. The prayers of both could not be answered. That of neither has been answered fully. The Almighty has His own purposes. "Woe unto the world because of offenses; for it must needs be that offenses come, but woe to that man by whom the offense cometh." If we shall suppose that American slavery is one of those offenses which, in the providence of God, must needs come, but which, having continued through His appointed time, He now wills to remove, and that He gives to both North and South this terrible war as the woe due to those by whom the offense came, shall we discern therein any departure from those divine attributes which the believers in a living God always ascribe to Him? Fondly do we hope, fervently do we pray, that this mighty scourge of war may speedily pass away. Yet, if God wills that it continue until all the wealth piled by the bondsman's two hundred and fifty years of unrequited toil shall be sunk, and until every drop of blood drawn with the lash shall be paid by another drawn with the sword, as was said three thousand years ago, so still it must be said "the judgments of the Lord are true and righteous altogether."

With malice toward none, with charity for all, with firmness in the right as God gives us to see the right, let us strive on to finish the work we are in, to bind up the nation's wounds, to care for him who shall have borne the battle and for his widow and his orphan, to do all which may achieve and cherish a just and lasting peace among ourselves and with all nations.
God For Us: The Trinity and Christian Life
Catherine LaCugna

"The 'spiritual life' of Christians is nothing more than training the eye of the heart on the glory of God, and living in such a way that one acquires the habit of discerning the brilliance of God's glory. . . . By encountering the glory of God we are changed by it, much the same way that we are transformed over time by our relationships with others, especially those relationships that touch us most intimately. Christian life is indeed an ongoing encounter with a personal God who brings about both our union with God and communion with each other. Union with God and communion with each other are actualized through doxology." (p. 345). 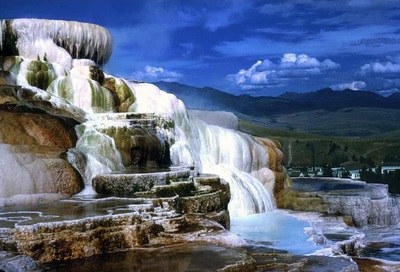 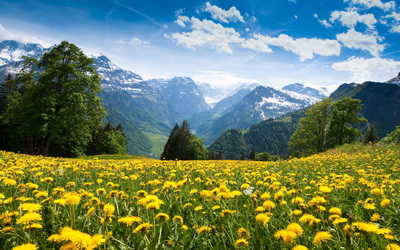 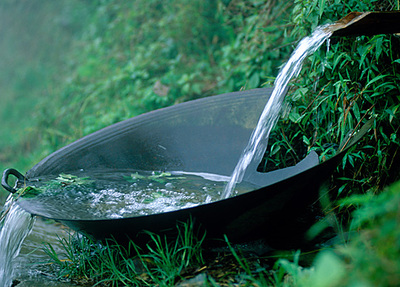 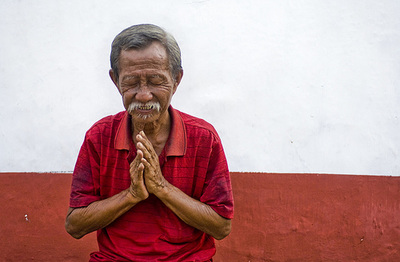 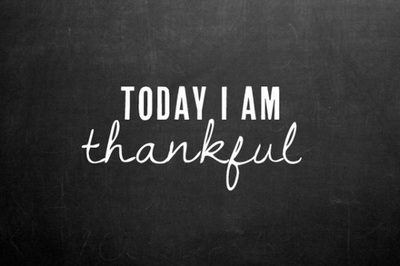 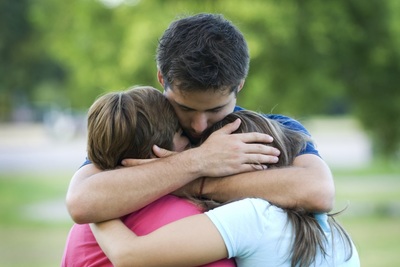 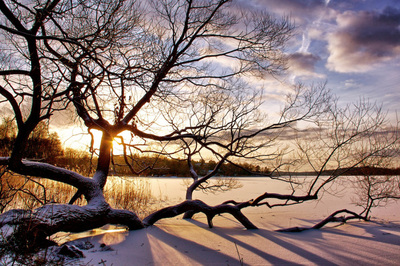 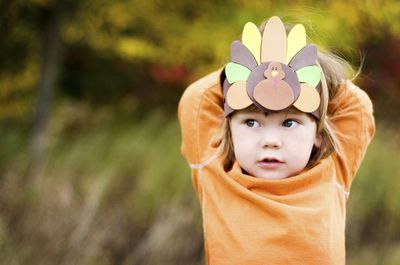 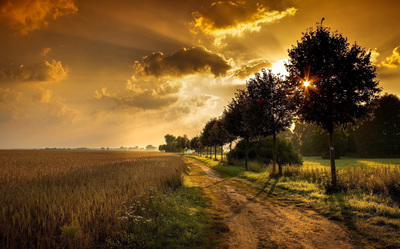 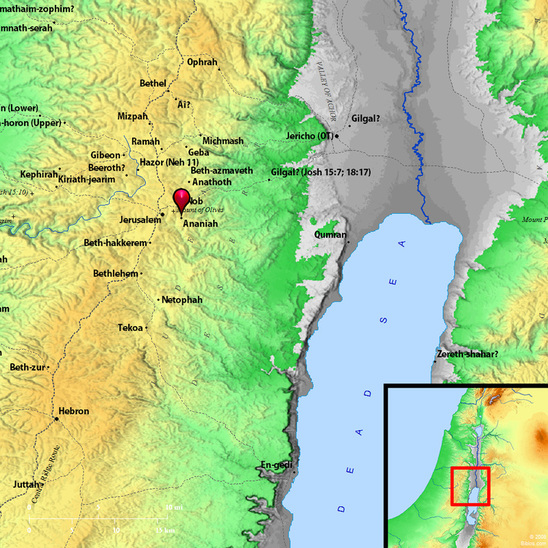 THE WORD THAT CAME TO JEREMIAH from the Lord in the tenth year of King Zedekiah of Judah, which was the eighteenth year of Nebuchadrezzar. At that time the army of the king of Babylon was besieging Jerusalem, and the prophet Jeremiah was confined in the court of the guard that was in the palace of the king of Judah.

After I had given the deed of purchase to Baruch son of Neriah, I prayed to the Lord, saying:

The word of the Lord came to Jeremiah: See, I am the Lord, the God of all flesh; is anything too hard for me?

For thus says the Lord: Just as I have brought all this great disaster upon this people, so I will bring upon them all the good fortune that I now promise them. Fields shall be bought in this land of which you are saying, It is a desolation, without human beings or animals; it has been given into the hands of the Chaldeans. Fields shall be bought for money, and deeds shall be signed and sealed and witnessed, in the land of Benjamin, in the places around Jerusalem, and in the cities of Judah, of the hill country, of the Shephelah, and of the Negeb; for I will restore their fortunes, says the Lord.

FOR THE LIFE OF THE WORLD

… In the Bible the food that man eats, the world of which he must partake in order to live, is given to him by God, and it is given as communion with God. The world as man’s food is not something “material” and limited to material functions, thus different from, and opposed to, the specifically “spiritual” functions by which man is related to God. all that exists is God’s gift to man, and it all exists to make God known to man, to make man’s life communion with God. It is divine love made food, made life for man. God blesses everything He creates, and, in biblical language, this means that He makes all creation the sign and means of His presence and wisdom, love and revelation: “O taste and see that the Lord is good.”
Man is a hungry being. But he is hungry for God. Behind all the hunger of our life is God. All desire is finally a desire for Him. To be sure, man is not the only hungry being. All that exists lives by “eating.” The whole creation depends on food. But the unique position of man in the universe is that he alone is to bless God for the food and the life he receives from Him. He alone is to respond to God’s blessing with his blessing. The significant fact about the life in the Garden [of Eden] is that man is to name things. As soon as animals have been created to keep Adam company, God brings them to Adam to see what he will call them. “And whatsoever Adam called every living creature, that was the name thereof.” Now, in the Bible a name is infinitely more than a means to distinguish one thing from another. It reveals the very essence of a thing, or rather its essence as God’s gift. To name a thing is to manifest the meaning and value God gave it, to know it as coming from God and to know its place and function within the cosmos created by God.
To name a thing, in other words, is to bless God for it and in it. And in the Bible to bless God is not a “religious” or a “cultic” act, but the very way of life. God blessed the world, blessed man, blessed the seventh day (that is, time), and this means that He filled all that exists with His love and goodness, made all things “very good.” So the only natural (and not “supernatural”) reaction of man, to whom God gave this blessed and sanctified world, is to bless God in return, to thank Him, to see the world as God sees it and – in this act of gratitude and adoration – to know, name, and possess the world. All rational, spiritual, and other qualities of man, distinguishing him from other creatures, have their focus and ultimate fulfillment in this capacity to bless God; to know, so to speak, the meaning of the thirst and hunger that constitutes his life. “Homo sapiens” [the one who understands], “homo faber” [the one who makes], …yes, but first of all, “homo adorans” [the one who worships]. The first, the basic definition of man is that he is the priest. He stands in the center of the world and unifies it in his act of blessing God, of both receiving the world from God and offering it to God – and by filling the world with this eucharist [thanksgiving], he transforms his life, the one that he receives from the world, into life in God, into communion with Him. The world was created as the “matter,” the material of one all-embracing eucharist, and man was created as the priest of this cosmic sacrament.
​Alexander Schmemann:  For the Life of the World
St. Vladimir's Seminary Press, 1973, pages 14-15
​ISBN 978-0-913836-08-8 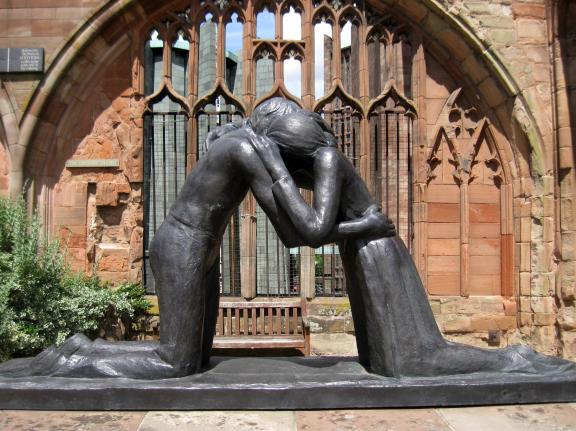