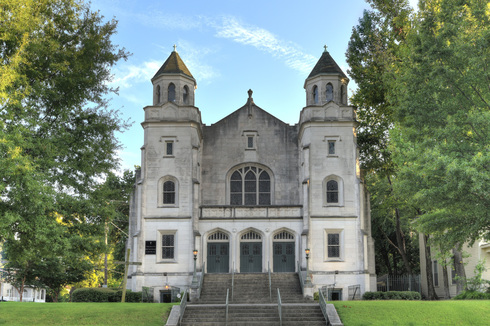 Organized Methodism in America began as a lay movement. Among its earliest leaders were Robert Strawbridge, an immigrant farmer who organized work about 1760 in Maryland and Virginia, Philip Embury and his cousin, Barbara Heck, who began work in New York in 1766, and Captain Thomas Webb, whose labors were instrumental in Methodist beginnings in Philadelphia in 1767. African Americans participated actively in these groundbreaking and formational initiatives though much of that contribution was acknowledged without much biographical detail.

To strengthen the Methodist work in the colonies, John Wesley sent two of his lay preachers, Richard Boardman and Joseph Pilmore, to America in 1769. Two years later Richard Wright and Francis Asbury were also dispatched by Wesley to undergird the growing American Methodist societies. Francis Asbury became the most important figure in early American Methodism. His energetic devotion to the principles of Wesleyan theology, ministry, and organization shaped Methodism in America in a way unmatched by any other individual. In addition to the preachers sent by Wesley, some Methodists in the colonies also answered the call to become lay preachers in the movement.

The first conference of Methodist preachers in the colonies was held in Philadelphia in 1773. The ten who attended took several important actions. They pledged allegiance to Wesley’s leadership and agreed that they would not administer the sacraments because they were laypersons. Their people were to receive the sacraments of baptism and the Lord’s Supper at the local Anglican parish church. They emphasized strong discipline among the societies and preachers. A system of regular conferences of the preachers was inaugurated similar to those Wesley had instituted in England to conduct the business of the Methodist movement.

The American Revolution had a profound impact on Methodism. John Wesley’s Toryism and his writings against the revolutionary cause did not enhance the image of Methodism among many who supported independence. Furthermore, a number of Methodist preachers refused to bear arms to aid the patriots.

When independence from England had been won, Wesley recognized that changes were necessary in American Methodism. He sent Thomas Coke to America to superintend the work with Asbury. Coke brought with him a prayer book titled The Sunday Service of the Methodists in North America, prepared by Wesley and incorporating his revision of the Church of England’s Thirty-Nine Articles of Religion. Two other preachers, Richard Whatcoat and Thomas Vasey, whom Wesley had ordained, accompanied Coke. Wesley’s ordinations set a precedent that ultimately permitted Methodists in America to become an independent church.

In December 1784, the famous Christmas Conference of preachers was held in Baltimore at Lovely Lane Chapel to chart the future course of the movement in America. Most of the American preachers attended, probably including two African Americans, Harry Hosier and Richard Allen. It was at this gathering that the movement became organized as The Methodist Episcopal Church in America.


John Wesley was an ardent opponent of slavery. Many of the leaders of early American Methodism shared his hatred for this form of human bondage. The United Brethren in Christ took a strong stand against slavery, as church members could not sell a slave, and by 1837 ruled that slave owners could not continue as members. As the nineteenth century progressed, it became apparent that tensions were deepening in Methodism over the slavery question. In this matter, as in so many others, Methodism reflected a national ethos because it was a church with a membership that was not limited to a region, class, or race. Contention over slavery would ultimately split Methodism into separate northern and southern churches.

The slavery issue was generally put aside by The Methodist Episcopal Church until its General Conference in 1844, when the pro-slavery and anti-slavery factions clashed. Their most serious conflict concerned one of the church’s five bishops, James O. Andrew, who had acquired slaves through marriage. After acrimonious debate the General Conference voted to suspend Bishop Andrew from the exercise of his episcopal office so long as he could not, or would not, free his slaves. A few days later dissidents drafted a Plan of Separation, which permitted the annual conferences in slaveholding states to separate from The Methodist Episcopal Church in order to organize their own ecclesiastical structure. The Plan of Separation was adopted, and the groundwork was prepared for the creation of The Methodist Episcopal Church, South.

Delegates from the southern states met in Louisville, Kentucky, in May 1845, to organize their new church. Their first General Conference was held the following year in Petersburg, Virginia, where a Discipline and hymnbook were adopted. Bitterness between northern and southern Methodists intensified in the years leading to Abraham Lincoln’s election in 1860 and then through the carnage of the Civil War. Each church claimed divine sanction for its region and prayed fervently for God’s will to be accomplished in victory for its side.

Despite the internal theological differences that the churches experienced, they continued to cooperate with other denominations and acted to heal schisms that had taken place earlier in their own histories. For example, a division that had occurred in The Evangelical Association in 1894 was repaired in 1922, when two factions united as The Evangelical Church. A more important union, at least by statistical measurement, took place among three Methodist bodies—The Methodist Episcopal Church, The Methodist Protestant Church, and The Methodist Episcopal Church, South. Representatives of these churches began meeting in 1916 to forge a plan of union. By the 1930s their proposal included partitioning the united church into six administrative units called jurisdictions. Five of these were geographical; the sixth, the Central Jurisdiction, was racial. It included African American churches and annual conferences wherever they were geographically located in the United States. African American Methodists and some others were troubled by this prospect and opposed the plan of a racially segregated jurisdiction.

The majority of Methodist Protestants favored the union, although it meant accepting episcopal government, which they had not had since their church was organized in 1830. Following overwhelming approvals at the General Conferences and annual conferences of the three churches, they were united in April 1939, into The Methodist Church. At the time of its formation the new church included 7.7 million members.

On April 23, 1968, The United Methodist Church was created when Bishop Reuben H. Mueller, representing The Evangelical United Brethren Church, and Bishop Lloyd C. Wicke of The Methodist Church joined hands at the constituting General Conference in Dallas, Texas. With the words, "Lord of the Church, we are united in Thee, in Thy Church and now in The United Methodist Church," the new denomination was given birth by two churches that had distinguished histories and influential ministries in various parts of the world.

Theological traditions steeped in the Protestant Reformation and Wesleyanism, similar ecclesiastical structures, and relationships that dated back almost two hundred years facilitated the union. In the Evangelical United Brethren heritage, for example, Philip William Otterbein, the principal founder of the United Brethren in Christ, assisted in the ordination of Francis Asbury to the superintendency of American Methodist work. Jacob Albright, through whose religious experience and leadership the Evangelical Association was begun, was nurtured in a Methodist class meeting following his conversion.